As a practicing chest radiologist in Boston, one of this article’s authors (Dr. Hatabu) encounters several patients with drug-related pneumonitis (DRP) daily when on clinical duty. Sometimes DRP coexists with COVID-19 pneumonia or radiation pneumonitis. Recently, clinicians have begun to notice the increased incidence  of DRP associated with molecular targeted therapy and immunotherapy in patients with cancer and pre-existing interstitial lung disease (ILD) or interstitial lung abnormality (ILA). The Fleischner Society position paper on this topic is an extremely useful resource and answers a number of common questions about ILD and ILA.1 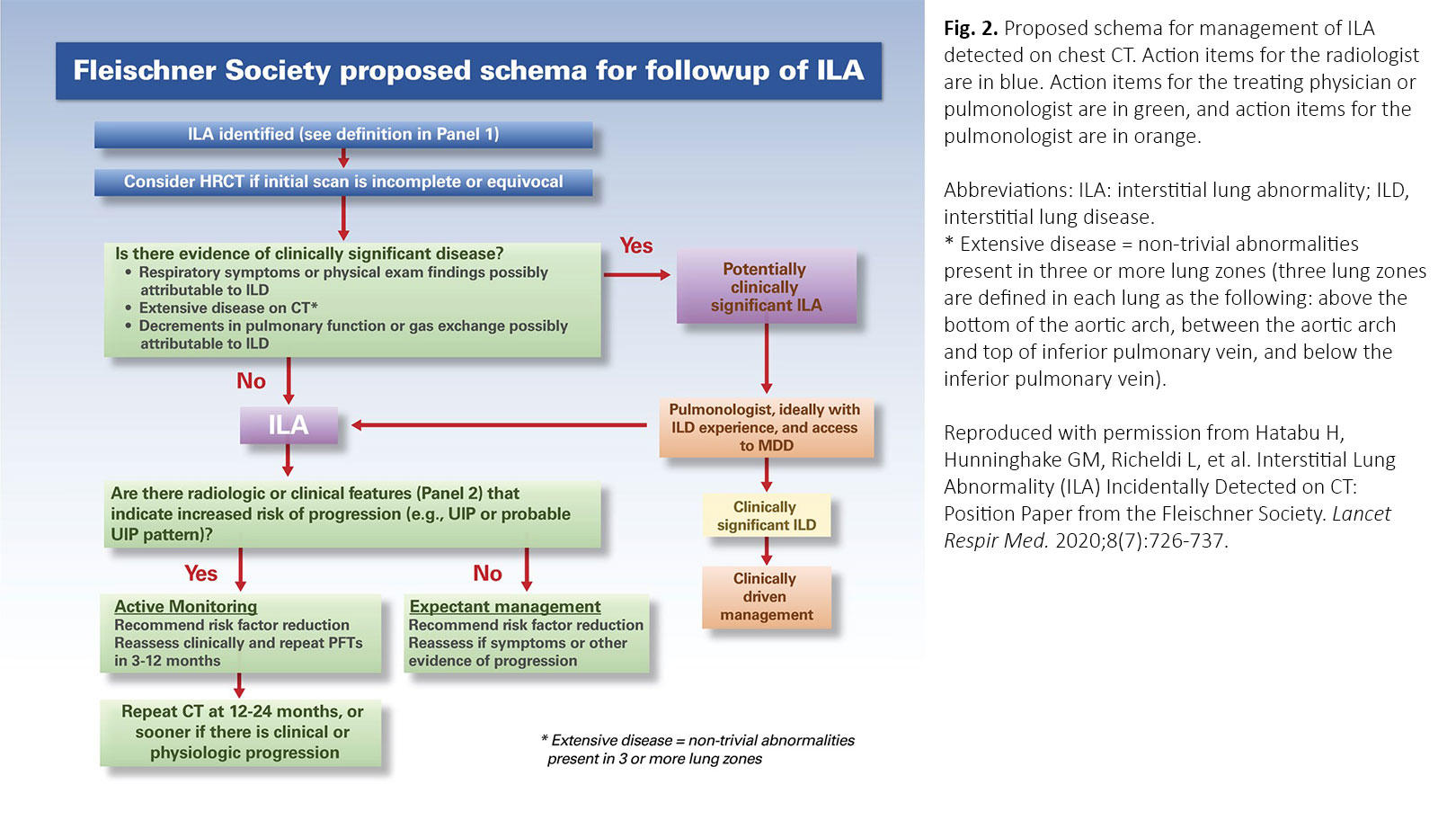 ILA refers to specific CT findings that are potentially compatible with ILD in patients without clinical suspicion of ILD. ILAs are increasingly recognized as a common feature on CT of the lung in older individuals, occurring in 4% to 9% of smokers and 2% to 7% of nonsmokers.2-7 ILA is associated with radiologic progression, increased mortality, and risk of complications from medical interventions such as chemotherapy and surgery.1 Panel 1 displays the definition and three subcategories proposed in the Fleischner position paper. ILA is defined as “incidental identification of non-dependent abnormalities, including ground-glass or reticular abnormalities, lung distortion, traction bronchiectasis, honeycombing, and non-emphysematous cysts involving at least 5% of a lung zone in individuals in whom ILD is not suspected.” ILAs are subcategorized into nonsubpleural, subpleural nonfibrotic, and subpleural fibrotic ILAs (Fig. 1). It is important to identify the subpleural fibrotic type of ILA, which is more likely to progress and to be associated with increased mortality.1 Treatment of patients with ILA hinges on the ability to successfully distinguish ILAs that constitute clinically significant ILD from those ILAs that are subclinical. The Fleischner Society proposed a scheme for follow-up in patients with ILA (Fig. 2).

When Does ILA Become ILD?

As we described in the previous section, ILA is defined purely by specific CT findings, whereas ILD is defined clinically based on symptomatology, pulmonary function tests, CT,  and sometimes by histologic examination as well as multidisciplinary discussion and consensus (Fig. 2). As indicated in the scheme, ILD is suspected among patients with ILA when:

Two of these three criteria rely on clinician assessment beyond CT findings. Again, it is very important to remember that ILD is defined clinically by clinicians with additional multidisciplinary discussion in difficult cases, whereas ILA is simply determined by CT findings. 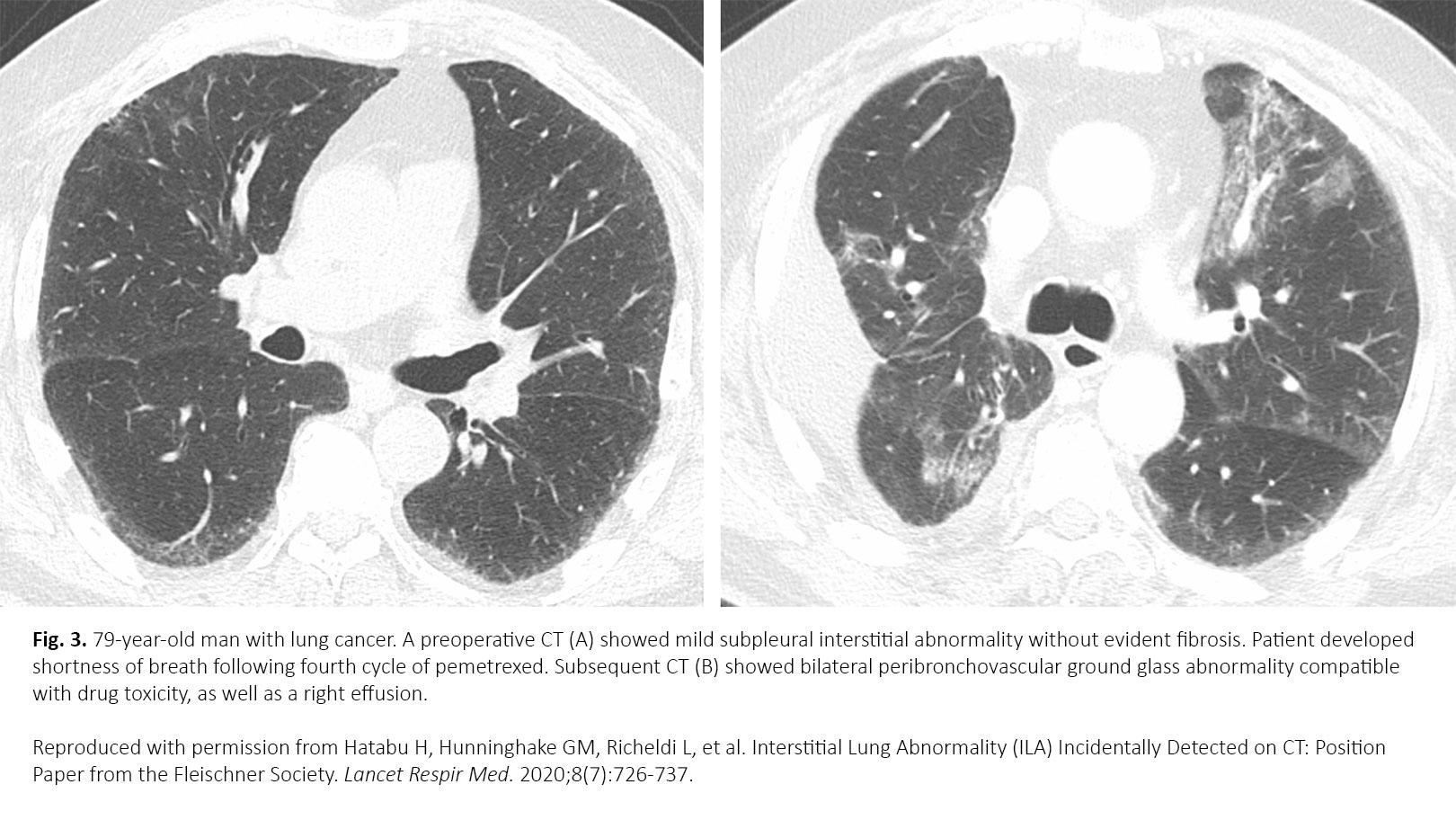 There are two aspects to consider regarding ILA in patients with lung cancer. The first, as noted previously, is that most ILA will be detected in the course of screening for lung cancer with current imaging protocols.2 The second aspect is the association of ILA with lung cancer treatment toxicity and lung cancer mortality.

Recent studies have shown an association between pre-treatment ILA and cancer-associated mortality, including patients with early-stage lung cancer treated with surgical resection, as well as patients with advanced, stage IV disease and systemic injury.8-12 The actual cause of this observed increased mortality is not clear, but studies suggest that lung injury associated with ILA and cancer therapies might be important. Indeed, lung irradiation and systemic therapy with chemotherapy and targeted tyrosine kinase inhibitors, immunotherapy checkpoint inhibitors, and antibody–drug conjugates are associated with an increased risk of pneumonitis in patients with pre-existing ILA (Fig. 3). Pre-existing ILA increases the risk of extensive radiation pneumonitis in patients with early-stage NSCLC lung cancer treated with stereotactic body radiotherapy and in patients with SCLC treated with a minimum of 50-60 Gy of thoracic radiotherapy.13,14 Given the life-threatening nature of lung cancer, the potential treatment-related side effects from immune checkpoint inhibitors, the benefits of therapy, and the undefined risks of ILA, clinicians need to discuss the possible increased risk of pneumonitis with patients who have ILA. In addition, patients undergoing these treatments who have ILA should be monitored closely with serial chest CT and pulmonary function tests for signs of progression of drug-related pneumonitis.15-17 It is important for ILA status to be considered an important clinical factor in therapy and a crucial component of  clinical management decision making for patients with lung cancer. ILA status should be considered in the context of risk versus benefit, rather than as a yes-or-no deterministic factor.

The prevalence of baseline of ILA is likely to become more important in the context of lung cancer screening programs. Clarifying the criteria for ILA and quantitative methods for evaluation of disease extent  are needed for development and validation. There is a clear need for further epidemiologic and biomarker-based machine-learning studies, as well as studies in novel cohorts to identify groups at higher risk of progression of ILA and to clarify the implications ILA may have on cancer management. In  patients with lung cancer, the clinician should regard ILA as a comorbidity that must be considered when planning therapy and monitoring.

What are not ILAs?
Imaging findings restricted to:

* Fibrosis is characterized by the presence of architectural distortion with traction bronchiectasis or honeycombing (or both).

Both authors served as committee members (Dr. Hatabu as Chair) and authors for the Fleischer Society position paper on ILA.