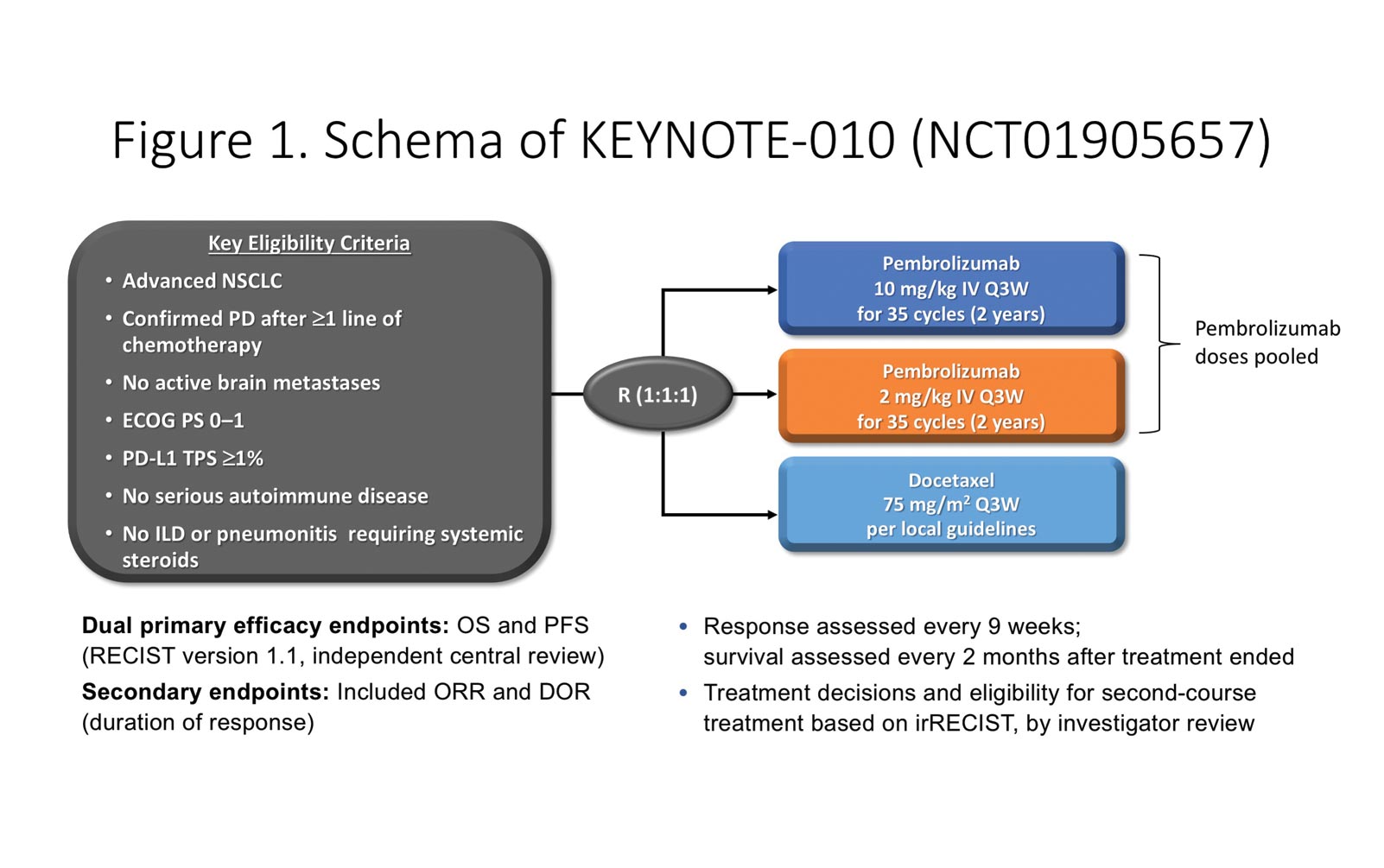 KEYNOTE-010 is an open-label phase II/ III study that compared pembrolizumab (2 mg/kg or 10 mg/kg every 3 weeks) with docetaxel in previously treated patients with advanced NSCLC with a PD-L1 tumor proportion score (TPS) of 1% or higher (Fig. 1). Treatment was continued for up to 35 cycles (approximately 2 years), with the option of retreatment with a second course of pembrolizumab at progression. Primary endpoints were overall survival (OS) and progression-free survival (PFS), with secondary endpoints of overall response rate and duration of response. The results from the initial analysis were published in The Lancet in 2016 and demonstrated significant improvement in OS at a median follow-up of 13 months, with a median OS of 12.7 months for pembrolizumab versus 8.5 months for docetaxel (HR 0.61; p < 0.0001).1 This led to the U.S. Food and Drug Administration approval of pembrolizumab in patients with previously treated metastatic NSCLC whose tumors express PD-L1 (TPS ≥ 1%).

The results from KEYNOTE-010 were part of a therapeutic revolution in the management of NSCLC and spurred the nearly universal adaptation of immunotherapy as second-line treatment for this disease. Similar results with other PD-1/ PD-L1 checkpoint inhibitors such as nivolumab2,3 and atezolizumab4 cemented the role of immunotherapy in the treatment of NSCLC. The KEYNOTE-010 study was also the first published phase III trial data to demonstrate the utility of selecting patients based on tumor’s PD-L1 expression status.1

Current Data
Updated results of KEYNOTE-010 were presented at the European Society for Medical Oncology 2018 Congress.5 Consistent with the previously reported final analysis,1 the updated efficacy and safety results from KEYNOTE-010 (with median follow-up of 42.6 months) confirm that pembrolizumab monotherapy provides a clinically meaningful survival benefit compared with docetaxel as a second-line treatment in PD-L1 positive (TPS ≥ 1%) NSCLC (Fig. 2). In the overall population of patients with NSCLC with TPS of 1% or higher, there was a median OS of 11.8 months in the pembrolizumab group versus 8.4 months in the group treated with docetaxel (HR 0.69; p < 0.00001). The OS benefit was even greater in patients with NSCLC with TPS of 50% or higher, with a substantially longer median OS of 16.9 months with pembrolizumab compared with 8.2 months for docetaxel (HR 0.53; p < 0.00001). The safety profile of pembrolizumab monotherapy in this study was consistent with the previously reported final analysis. Although the duration of exposure was longer for patients treated with pembrolizumab, there were still fewer grade 3 to 5 treatment-related adverse events, occurring in only 16% of the pembrolizumab group compared with 37% in the docetaxel group. Unsurprisingly, a recent publication in the Journal of Thoracic Oncology that used data from this trial demonstrated that in addition to prolonged survival, treatment with pembrolizumab monotherapy was associated with improved health-related quality of life as compared with docetaxel.6

Finding the Optimal Duration of Treatment
The updated information from KEYNOTE-010 also provides additional insight into an ongoing question: What is the optimal duration of treatment with checkpoint inhibitors? There is still little consensus regarding this issue in patients with NSCLC and other malignancies. For melanoma, updated results of KEYNOTE-006 demonstrated that among patients treated for 2 years, the majority (86%) had ongoing response after 20 months of observation, and of those who had disease progression, the majority responded to retreatment.7 CheckMate 153 evaluated continuous treatment versus 1-year fixed-duration treatment with nivolumab in patients with advanced NSCLC. Preliminary results suggested that continuous treatment beyond 1 year was beneficial, with improved PFS (HR 0.42) and a trend toward improved OS.8 These observations suggest that cessation at 1 year is too early. However, the question remains whether patients could potentially stop after a longer treatment duration, or if treatment should be continued as long as the drug is tolerated.

The updated results from KEYNOTE-010 may give support to the idea of a 2-year course of treatment. Of the 79 patients who completed 35 cycles (~2 years) of treatment, 26 (32.9%) had a PFS event after completing the 2 years, with a 36-month PFS rate of 70.3%. Fourteen patients went on to get a second course of pembrolizumab after progression following the initial 35 cycles of treatment. Of these 14 patients, six had a partial response, and five had stable disease during second treatment course; all 11 who responded or had stable disease were alive at the time of analysis (Fig. 3). These results are among the first from a prospective trial showing the outcome of retreatment with a checkpoint inhibitor in NSCLC. The substantial percentage of patients with ongoing responses following treatment cessation and the observation that the majority of retreated patients achieved either stable disease or partial response suggests that stopping treatment at 2 years may be reasonable. However, this is based on a small number of patients, and there is no long-term follow-up on the retreatment cohort; as such, it is premature to conclude that this is the best strategy. Additional study, ideally a prospective trial, is needed to further evaluate this important issue.

Overall, the results from long-term follow-up of KEYNOTE-010 confirm that pembrolizumab monotherapy is a safe and effective agent for patients with previously treated PD-L1– expressing NSCLC, with a clear advantage over chemotherapy in both survival and tolerability. Durable long-term freedom from progression is being observed in a sizable minority of patients. ✦